Yes, it was a fantastic Mass Arrival and a phenomenal week in the North 40 at AirVenture 2022! Our event this year brought one-hundred and two (102) aircraft in the mass arrival flight plus another four (4) airplanes that joined us later in the North 40. We had over two-hundred (200) pilots, relatives and friends at Cessna Base Camp, more new people than ever before and we are very happy for it. We registered a total of one-hundred-fifty-four (154) aircraft, of which one-hundred-six (106) remained in the roster to the end. Four (4) of those aircraft experienced mechanical issues and were unable to join us in the flight but made it to Oshkosh a little later and joined us at Cessna Base Camp for the week long celebration. It was indeed a memorable time.

We have to thank each and every one of our pilots, relatives and friends who took part in our event, from planning to execution, and evaluation. We sincerely thank those who assummed leadership at Camp, buying groceries, preparing and offering breakfast for the entire camp, especially Javier and Denise Camba and Bill and Jen Keating who again picked up the rear. 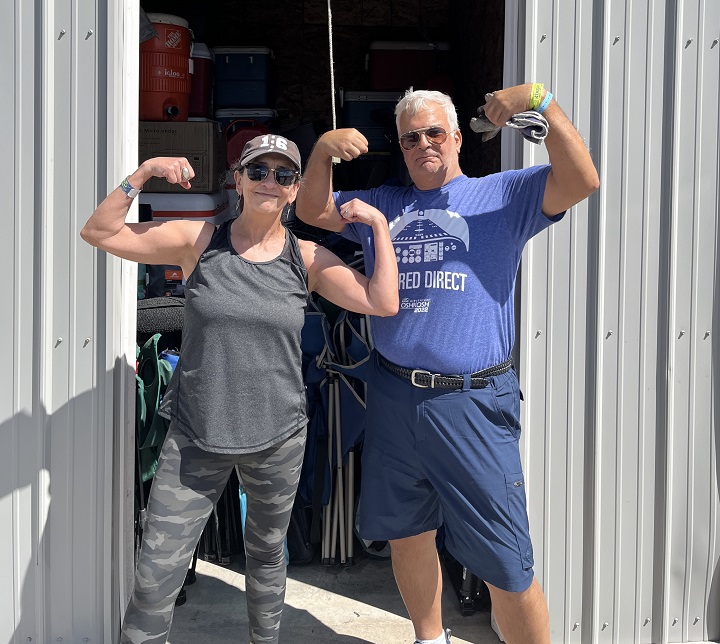 Our thanks to them and to the many other for the success of the 2022 Cessnas 2 Oshkosh Mass Arrival. Everyone worked really, really hard and made the extra effort to arrange personal, family and work schedules to attend formation training clinics and individual or small group training sessions, and making the long trek to Juneau.

We appreciate everyone's effort and look forward to seeing you all again on Saturday, 22 July 2023, and we'll do it all over again!

Cessna Base Camp in the North 40. Photo by Elizabeth (PIC Alberto Silva - Hotel-3)

We are thrilled to report that 102 aircraft participated in the 2022 Cessnas 2 Oshkosh Mass Arrival Flight. Thirty-six (36) of the 102 PIC flew our mass arrival for the first time in 2022. Our 102 PIC brought with them 90 passengers over the age of twelve (12) years and five (5) children under 12 years of age. We warmly welcome the new pilots and their passengers to our group and wish they had the most fun during our week of celebration at Cessna Base Camp and AirVenture. 49 pilots withdrew from participation for different personal, family, work-related and mechanical reasons. We missed them and hope that they will join us next year.

Thirty-two (32) states and three (3) Canadian provinces were represented. Texas led the states with fourteen (14) aircraft, followed by Florida with nine (9) aircraft, Virginia with eight (8), Illinois with six (6), and California with five (5) aircraft. The Canadian provinces of Ontario, Alberta and Nova Scotia sent one (1) aircraft each.

The Skylane (C182) and the Cardinal shared the model lead this time with thirty-two (32) aircraft each, the first tie ever in Cessnas 2 Oshkosh history. They were followed by the Skyhawk (C172) with twenty-four (24), and the Centurion with eight (8).

Needless to say, we are very happy with these results and want to express our heartfelt gratitude to all of our pilots, relatives and friends for their support.